Our Past Is Our Future

Our Past Is Our Future?

What does that mean? It means that those who study our past with an open mind are more able to avoid the mistakes of our past, and we have made some catastrophic mistakes in the past. I'm Douglas Stearns, author of a new series of science fiction novels called "Harmonic Wars" and I will be using this blog to share much of the research that I did to start this series.

Have you ever played the game "Pass it on" as a kid? My grade school teacher made the whole class play it once. We all got in a circle and she started by whispering a secret to the child next to her, who passed it to the next and so on. When it got back to the teacher, the secret was completely different from what she started. History is the same way, except worse. Historians are biased in their writings and allow outside influences to distort the facts. We can see examples of that even today where some common core curriculum describes the U.S. Second Amendment in general terms as "guarantees hunters the rights to own hunting rifles." Of course this is not the truth, but it is an example of political bias distorting the truth.

When we look back at ancient archaeological locations, we can begin to see a huge number of discrepancies that do not make sense with the narrative that modern archaeology and historians insist to be true. Because if they admitted the truth, then it would require that they admit that mankind at one time in our past was infinitely more advanced than we are today. We must look past our own arrogance that blinds us if we are to find the truth. 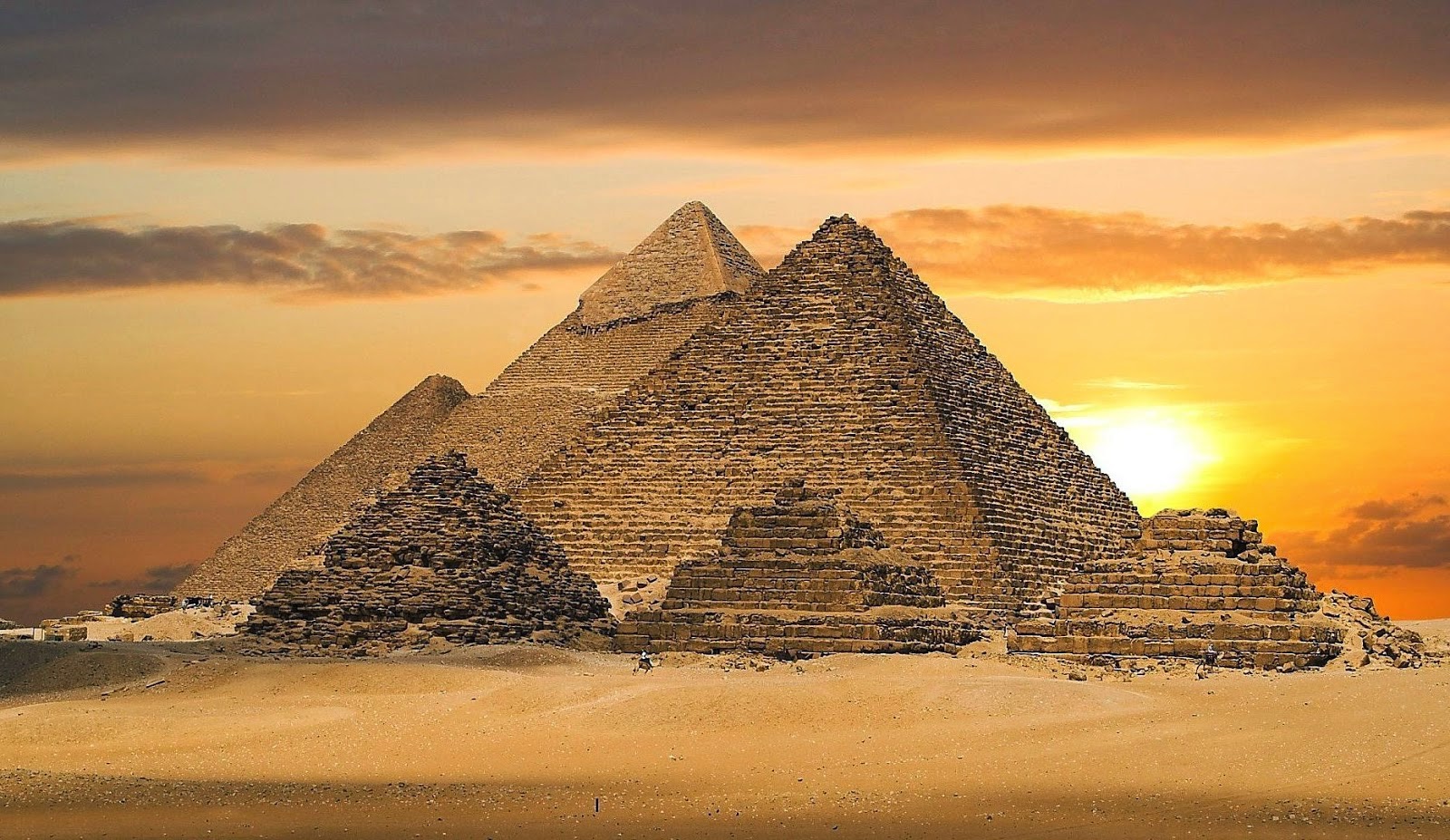 The Great Pyramid of Giza is one such enigma, and is also a focal point in Harmonic Wars. No other pyramid discovered has that level of precision in it's construction, nor do any of the others have that degree of engineering built into the very foundation. It is perfectly aligned to the cardinal points of the compass centuries before we ever invented one. Everything about the pyramid screams "I'm a machine, not a tomb!" Interesting fact: no mummy has ever been found buried in a pyramid, and the Great Pyramid is void of any signs of carvings, paintings, or reliefs. Not even a trace! Even in tombs that had been raided you could still find broken pottery, broken pieces of furniture, partial reliefs and paintings inside the tombs. They may be badly deteriorated, but the remnants could still be found. But nothing of that has ever been found in the Great Pyramid. Also, constructing a monument of this size to such precision with air shafts perfectly aligned at a consistent angle of ascent and maintain the height and width of the shaft along its entire length requires planning and advance engineering. So in a society filled with writings detailing wars, kings, family lineage, The Book of the Dead, etc., where are the plans they used to construct what would have been the crowning achievement of the time? How come there are very little references to how it was built?   We will come back to this in a moment.

How many pictures do you have in your cell phone that are not printed up? How many documents do you have saved on in the "Cloud"? Newspapers are going out of business, as are books stores and printed books in general. With the advent of the popular tablets more and more documents and books are digitalized and never printed. Why carry and store hundreds of heavy books when you can put thousands of them on your Nook or iPad? Where do you go today for information? A reference book, or do you go to the Internet? How many people still own "Encyclopedia Britannica?" There is no need to learn things when you can easily look them up on the web, right? Now move 15 years into the future. Is anything still printed hard copy? Probably not. Even today e-books sales are keeping pace with hard copies.

Now, what happens when a massive solar flare destroys all the power grids across the globe. Or maybe it's a domestic terrorist, or a foreign enemy? Only one Electro-Magnetic Pulse weapon strategically placed would crash the entire power in the United States. We could recover from that, but it would take several months and the destruction due to the chaos would be significant. But an Al Qaeda style coordinated attack that destroys the power grid in multiple locations would be devastating and very difficult for our current civilizations to recover from. Same thing with a massive solar flare, only much worse as ALL electrical circuits could be destroyed. All the above are possibilities, and the threats are very real. What do you think life would be like under those circumstance?

No electricity would be pure chaos. The recent Ferguson riots and Hurricane Katrina are a small indications of what could happen. First there would be a run on all stores and widespread looting. The transportation capabilities would stop very quickly as fuel ran out if it could even be pumped out (all the gas pumps run off electricity). Then the water would stop flowing as the pressure slowly ran down  out of the existing water towers once the massive pumps shut down. Do you know how to grow your own food? What wild berries and plants you can safely eat? Can you hunt and fish and still protect yourself and your family? Where do you find that kind of information today: it's on the Internet easily accessible, given us a false sense of security that it will always be there. Now what do you reference when the Internet is down?

There would be pockets of society with a few brilliant people who understood enough engineering and physics to rebuild some of the power plants. Those societies would be the exception and not the norm. As food and water runs out, people become desperate and violent. But a few might be able to pull together for the good of all to rebuild some of what was lost. The rest would become so wrapped up in survival, that they would quickly forget how good things once were as they all but de-evolve into a hunter-gatherer state. Within 2 generations most people would not be able to comprehend the immensity of the Internet, or even the concept of electricity. It would seem like magic to them, and only the stories of legend.

What if this already happened? What if the Great Pyramid is one ancient society's attempt to rebuild a much older energy technology? We have a pretty well documented timeline of our history back to about 4,000 years. Anything before that becomes really fuzzy quickly. For fellow Christians think before the flood of Noah's time. We were made in God's image. Isn't it reasonable to think God would have shared his perfect knowledge with Adam and Eve, and their children? Those who ignore history are doomed to repeat its failures. I think we are potentially on the verge of repeating this event.

Now, back to the question of where are the plans to build the Great Pyramid: is it so hard to believe that they are missing? What if they were saved electronically, and not carved in stone? Where were they saved? Maybe they used a crystal-based data storage capability? We could have been looking right at the Library of Alexandria and not realized it for what it is.

Think about what people in a post apocalyptic society would need to do to survive. With limited capability to produce items, they will have to rely on nature for many things. Baghdad batteries have been recreated today and are proven to produce a low level of electricity using vinegar or orange juice as fuel.  What other things might they had to revert to? How about a simplistic written language that creates symbols to express words or meanings? Cuneiform, hieroglyphs and Chinese characters fill this need pretty nicely, right? Can you think of a modern day equivalent? :-)  Could we already have the beginnings of this in our society today? IDK. How many Text Message Abbreviations  do you use now? LMK, LOL.

There are many explanations for the mysteries of the Great Pyramid, but I prefer the reality that it was once a machine of some type over the traditional historians account that it was a burial chamber for Cheops...or was his name Khufu? I find that another interesting aspect: why two names? Could it have been two different engineers who oversaw the construction that lasted years? Sounds like a Master and his apprentice to me. The pharaohs like Ramses, Tutankhamen, and countless others where only recognized by one name ... not two. Regardless, Egyptologists continue to overlook, marginalize and discount the very important facts that make the rest of us question the validity of their assertions that it was a burial chamber totally void of relics, paintings, or any carvings of a traditional tomb where actual remains have been found.

Christopher Dunn has some very interesting thoughts on a purpose of the Great Pyramid from an engineering aspect. I believe that Nikola Tesla had simply rediscovered this wireless power technology using Earth's natural power that had been used long ago. Dunn also talks about the evidence of an explosion inside the King's Chamber, which signaled the death of this power plant.  Here is one of his drawings of what type of power generator it could have been: 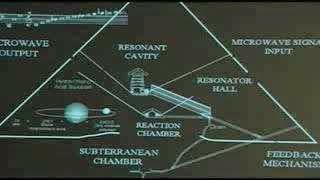 Lastly, the precision in subsequent pyramids were not of the same quality, also resulting in similar explosions. In my opinion,  the builders of those pyramids were the common but highly skilled workers of the original power plant. They lacked the engineering back ground and perseverance needed to ensure the same level of precision was maintained throughout the building of the replacements. And the result was immediate failure of the new power plants.

In my next post we will discuss some evidence of older power grids and types with more of a focus on sound. Until then, take care!