Tell me what you think about the new cover art for the first book in the Harmonic Wars series, "Guardians of the Crystal Skulls"!

We had several contenders, but we are pretty pleased with the final results. We also have the narrative done for the back cover:


So Begins a Multi-Dimensional War for Control of the Universe … 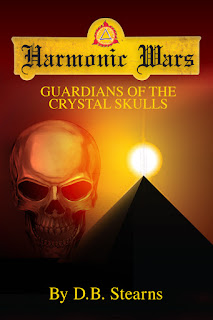 For thousands of years the peaceful Balsarius lived in fear of the G`Alad Warrior Guild that had destroyed the Masu`ri settlement at the beginning of the Harmonic Wars, over 12,000 years ago. Led by the Shihan Marcus Kahn, the Balsarius fought Admiral Ares and the G`Alad to a stalemate. Now, Ares and the G`Alad have renewed their vain search for the last Pyraportal. This self-energized pyramid-shaped portal is the last thing standing between the Balsarius and certain destruction.

Badly out numbered and outgunned, the Balsarius enlisted the empathic Mayan Grand Council to help provide balance in the Harmonic Wars. Armed with newly acquired crystal skulls and Anti-Grav Suits, 13 beautifully ageless women help Shihan battle against the G`Alad’s continuing efforts for control of the galaxy. But evil walks in the Land of Dreams and threatens to throw the balance back in favor of evil. The Guardian Alana Akholay has seen strange shadows roaming around in the dangerous Land of Dreams. Now she must help Queen Ana’ka protect her great-great grandson Arturo from the wickedness that threatens to consume him.

Harmonic Wars is a story of Good vs. Evil locked in a multi-dimensional war for the ultimate control of the universe. Unravel the mysteries of the power of empaths who can project their emotions with devastating effect in this new SciFi thriller series Harmonic Wars!


Let me know your thoughts! Is this enough to grab readers' attention?